North and Central America - Round 4

Which national park will join Nepal in the Final Four from the North and Central American bracket? Well, lets find out!

(4) Wyoming vs. (6) Banff and Jasper
In a final for the ages, Canada’s first National Parks go up against America’s first National Park. To be fair, the game will be played on a neutral ground, namely, Mexico’s first National park, El Chico. In an unexpected twist, the Canadian Minister of Tourism met with the American Minister of Tourism before the match and the two decided to make this a one-on-one game of HORSE between the state teams stars. As such, Yellowstone would represent Wyoming and Banff would represent the Canadian Rockies. For those unfamiliar with the game of HORSE, it is a popular form of ‘trick’ basketball, whereby one player does some form of feat as a challenge, to which the other player must duplicate. For instance, the first player may shoot a 1 handed blind free throw, and if it is made, the next player must duplicate it, or that player will receive a letter of the word HORSE. The first to get all 5 letters is the loser. As it turned out, this made for a very exciting and surreal game between the two titans of the outdoors. Yellowstone started by placing the ball on Old Faithful and having it thrown into the basket. Banff, although with her hot springs, had nothing to reply with, naturally. An H to Banff. Next up Banff tried a double tomahawk slam, throwing Mt Rundle – over 9,000 feet - to the basket to bring down the backboards. Of course, Banff must have forgotten who its opponent was, as Yellowstone simply threw Eagle Peak at over 11,000 feet, to slam it down. And thus went the game. Yellowstone simply sat there and repeated the slogan, “anything you can do, I can do better”, incessantly goading on Banff. When Banff decided to throw its grizzly bear charge at the basket, Yellowstone simply responded with its own form of the grizzly charge. The letters began to pile up against Banff, as sad Canadians, so proud of their park, looked on. Yellowstone threw waterfall slams after waterfall slams at Banff, thus piling on the letters, until the score was HORS for Banff and H for Yellowstone (the sole move that Banff could pull off was the totem pole pump, whereby various animals piled on to one another and did a flying 360 to dunk. Yellowstone, already way ahead, chose not to risk such a move with its endangered species). The final move that sealed the deal for Yellowstone was the buffalo water gap jump – similar in detail to leap frog but involving buffaloes, the move transcended animal movement and resulting in a cacophonous wailing of victory. Yellowstone remained the king of North American tourism destination and moves on to the final four, to be joined next by the exciting South American/African/Antartica bracket winner! 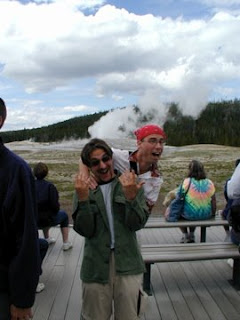 I've been to both Wyoming/Yellowstone and Banff/Jasper and I understand how close the match was. But I disagree with the winner. It should have been Banff/Jasper! It might be because you forgot to mention two key players, namely, Serge and yourself dressed in "historical cotton bathingwear". Surely, if they'd been on the court, their opponent would have fallen down laughing and forgotten to score -- hence ensurring the win for Banff/Jasper.