North and Central America - Round 3

Regional Semifinal action. Let's get it on.


(1) New York City vs. (4) Wyoming
Ok, here we go. The ultimate face-off between man-made mountains of steel and earth made mountains of igneous rock. FAO Schwarz, Saks Fifth Avenue, Tiffany & Co. and Bergdorf Goodman go up against grizzly bears, wolves, bison and elk in the ultimate street brawl. New York City should probably have gone the way of the Europeans – as we will encounter in that bracket, the cities have simply taken over the entire land, leaving no room for any outdoor competitors. As it is, Wyoming smokes “the City”. As a revenge for all those snooty New Yorkers I had to put up with at Cornell, who believed the universe began and finished with the Staten Island Ferry, I say, “Knicks suck, Yankees suck, Rangers suck, Jets suck.” Wyoming is truly a land that must be visited in one’s lifetime, and not just for the Taco John’s. The sky is grander. The water is purer. The mountains are more majestic. The beauty of the land is unsoiled by man-made intrusions. Yellowstone is the model for all parks across the world. Come to Wyoming, and you’ll feel like the high school sweetheart feels walking down the steps to meet her date for the senior prom: beautiful that is to say. 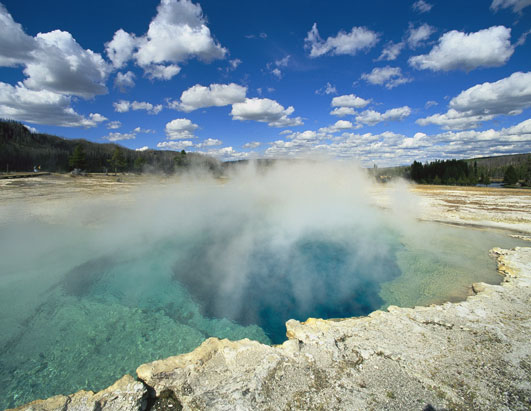 (10) Pacific Coast Highway vs. (6) Banff and Jasper
A strange thing happened at the Jerome Schottenstein Center – the basketball home of the Ohio State Buckeys – sight for the second regional semifinal game between the Pacific Coast Highway and Banff/Jasper. You see, the Californians failed to show up. After some confusion on the part of the referees, they gave the victory, by default nonetheless to the Canadians. The Minister of Alberta tourism had this to say about their victory: “Well, we’re real soory that California couldn’t make it to the game. We would have gladly played them today, I’m not sure why they didn’t make the game. The boys are soory if they said anything to offend our opponents. But we’ll take this victory and move on to the finals against Wyoming.” Later it was reported that the surfers and OCers of the Pacific Coast team simply found other things to do at the time of the game. One surfer had this to say “Yo dude, like, that game was all the way in Ohio, check me right. So I was ridin’ this killa wave and I just thought, yo dude, don’t even like fret man. Why even leave Cali.” Starting point guard, and OC resident, Latisha Yondo had this to say afterwards “Oh my god, like whatever. I was so shopping at that time. I mean like come on. I know. Like whatever. There was like these amazing deals, and like, I couldn’t pass them up, like you know. Whatever.” In any case, Banff/Jasper move on to face Wyoming in the finals. America’s first national park comes up against Canada’s first national park in what many are now referring to “the mirror match-up”.

As disappointed as I am about the defeat of the Queen Charlotte Islands, I am thrilled to see the nature North vs nature South final. Niiiice (as per Borat).