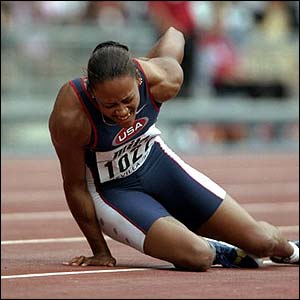 As many of you know, Marion Jones, one time dubbed the greatest female athlete on earth, joins the growing ranks of disgraced sprinters. She testified last week to having lied to federal investigators about her drug use. For the record, these aren't the drugs your cousin in BC is smoking. These are the kinds of drugs that Ben Johnson could only dream of.

My question for Marion Jones is this: if she had wanted to compete in the Special Olympics, she shouldn't have just told us a few years back that she was mentally challenged. This woman expects us to believe that she thought she was given flaxseed oil. Ya Marion, I know that I've been trying to increase my Omega-3 intake and decided the best way was to jam a needle in my ass, since everyone knows that flaxseed oil comes in needle form from a designer drug company (that company being BALCO). So let me get this straight. First you cheated to win gold medals in Sydney. Then you lied. Then you probably cheated on your husband (or sorry, make that husbands). Then you lied some more. Then you hired lawyers to preemptively lash out at the media for thinking that your manly physic was purely a case of God given genetics and not synthetic drugs. Oh then you lied to federal investigators. And finally you decided to break down in court, cry in public and ask for forgiveness. Tell me something, do you plan on giving back some of your winnings? Oh wait, no you don't, because you used up all that money on more performance enhancing drugs and lawyers. The strange this is, if you read the articles over the week, many people seem to empathize with her.

Marion Jones should be shamed to the same extent she was famed. She has been lying and cheating for years. In her admission of guilt, she continues to claim that it wasn't her fault. She didn't "knowingly" takes steroids. She blames this on her coach, Trevor Graham. Now Graham by no means deserves anything less than our complete vehemence, but this is not all his fault. Marion Jones tested positive for EPO last year. But then she got lucky and her 2nd sample was found negative. Strange how that seems to happen always when you need it to happen. In 2004, she vociferously claimed to have never taken drugs. Many sports pundits believed her. She has long been assumed to be clean. But for the last few years, the public has begun to realize that many world class athletes have been cheating for years.

The strange thing is that I'm not here to denigrate her drug use. For whatever reason, she didn't believe that her talent was enough. She has to live with the physical effects these drugs will have on her body, not to mention the emotional and moral conscience that she has to live with for knowing that she won by cheating. What really gets me is that for so many years she put herself on the moral high ground. Even now, she refuses to accept full responsibility for her actions. I don't agree with the long list of journalist who are applauding her for giving back her medals and for apologizing to others. There is more to this story than meets the eye. In the coming weeks, or months, we'll find out why she decided to come out now. The International Olympic Committee has had a file on her for years. She was going to lose her medals anyway.

It bothers me that an athlete like this is now what gets track & field on the cover of newspapers. The public has lost its trust in sprinters, and other track & field athletes. I only hope that a disgraced downfall of enough sprinters will satiate the public's interest and we can get back to having trust that promising young athletes are drug free.
Posted by Anonymous at 22:29

Well written,Rich. I think I must have taught you all you know. HA HA
Your Grandpa would have loved to sit with you and discuss politics.
MOM