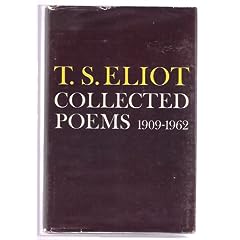 I hardly pretend to be a poetry critique. In fact, I would consider myself to be an amateur of the poetry world - and not in the french sense amateure. At this stage, I'm not even sure I am of fan of the genre. That being said, I am nothing if not devoted to slogging through works of "quote" great writers. And to this end, I must enter the Waste Lands, so to speak.

Eliot is without a doubt one of the most recognized names of poetry - be it 20th or any Century. Millions of North American high schoolers have anguished at the chore of reading Eliot's work. Actually, let me rephrase - not the chore of reading his work, but rather in attempting to understand it. At stages, I consider all poetry to be fluff and drivel. However, there is the odd sequence of lines that illuminate the beauty of not only the work, but dare I say, life itself. And for this reason alone, I persist. I carry on. I attempt to apply what little patience I have to understanding Eliot's work. My weakness, or rather my failings, are that I often feel confronted by a enormous wall of intellect. Eliot's far eastern studies, his knowledge of theology - both eastern and western - and his ability to pull from a variety of antequated and modern sources, all make for a daunting challenge for those who seek to not simply understand, but appreciate his work. His work humbles me, if for nothing more, that it challenges me to return to it at a later date whence I would presumably have found elucidation.

excerpt from The Hollow Men:

It is like this
In death's other kingdom
Waking alone
At the hour when we are
Trembling with tenderness
Lips that would kiss
Form prayers to broken stone.
Posted by Rich at 17:41

Pulsar Watches are conveniently offered by way of many rolex replica sale on the planet, as well as through several retail web sites only and savory costs ranging from hublot replica uk and going higher based on the quantity of functions. Nevertheless the price tag ranges generally suit the watches and absolutely everyone is bound to locate the fake rolex sale for themselves if they look amongst the vibrant collection of Pulsar Watches. Pulsar Watches are essentially the most loved brand because of the magnificent high quality of replica watches sale they supply its customers and at a very affordable cost range at the same time. Pulsar Watches could have got recognition due to its collaboration with replica watches uk but it has created its mark globally and it is a mammoth within the watch-making organization, and Pulsar Watcher are genuinely loved and bought by quite a few men and women all about the globe, as they sell substance with style, fine technologies, guaranteed durability, a wide range with diverse patterns for all types of people today at rolex replica sale desirable and inexpensive rates and it continuous to keep its standards.