Haroun and the Sea of Stories - Salman Rushdie 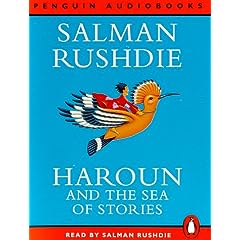 Easily the most accessible of Rushdie's novels, Haroun and the Sea of Stories is certainly his most efficient, if not to say proficient. Much like Paulo Coehlo's The Alchemist, Rushdie has sown a fantastical children's tale with a magical realist's yarn.

If you have always wanted to read Rushdie, but had trouble slogging through some of his more, shall we say, dense work, then Haroun's tale is indeed a story for you.

Highly recommended for children and adult alike :) Embark on a young boy's quest to the land of Kahani, where he searches for a cure to his father's - the Shah of Blah - sudden silence, lamentably laconic.

As for "impossible", he went on, 'most people would say that everything that's happened to you lately is quite, quite impossible. Why make a fuss about this particular impossible thing?'
Posted by Anonymous at 13:18

i feel like this blog entry could have started out "dear amanda and alicia...."

Helpful blog, bookmarked the website with hopes to read more!