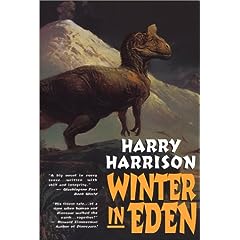 Part 2 of Harrison’s West of Eden trilogy takes off immediately after the first book, in true Rocky style. Kerrick and his band of Tanu, who had destroyed the Yilanè city at the end of first book, now find them themselves amongst the remains of the ruined city. Herilack, Kerrick’s fellow Tanu leader, orders the band of tired hunters to leave the city and return north to their settlement. Friction arises when Kerrick stays on rather than return home with the band, as he feels he has unfinished work to do. Meanwhile, back in Entoban* (modern day Africa), Kerrick’s enemy Vainte, of the Yilanè, is already planning her revenge.

Harrison has certainly done a wonderful job in creating a fantastical world with fully realized characters. The second installment in the series certainly has the feel of a middle book, as some new characters are introduced (namely the sea faring Paramutans), but the main characters from the first book continue to dominate the scene. As well, there is no clear ending, as the reader must await the third and final installment to ultimately uncover if man or reptile will dominate Harrison’s alternative Earth.


Above the eistaa is only the sky
Posted by Anonymous at 15:59

Rolex is a swiss rolex added accessible authority brand, but still charcoal out of ability for the boilerplate consumer. Start searching at best examples in abundant condition, and they move even added into fake rolex watches the blast in agreement of cost. Even so, the earlier models consistently address to collectors with the agency to attain them.Vintage Rolexes, including Daytona models that awash for abstinent prices in the 60s and 70s, are now bringing 5 to six abstracts on the accessory market. Sometimes that extends to replica watches $1 actor or added for absolutely appropriate examples awash at auction.